Bolognese breeder in the US.

Our Bolognese are registered with:​

Bolognese History and information...Bolognese have a crimpy, silky like coat. They have been raised for centuries for no other purpose than strictly companions for people. Therefore, they are the ultimate companion dog and are loyal, love your attention, and are abundantly affectionate. They have very strong attachments to humans and love pleasing you. They are even tempered, highly intelligent and love to be trained. Their winsome ways captivate your heart. They instinctively perform what is called the bolo dance in which they stand upright and dance around, rolling their paws in the air to greet you. They are calm and friendly and love you unconditionally. Bolognese are non-shedding, Hypoallergenic dogs. Bolognese are all white dogs.

ABOUT ITALIAN BOLOGNESE...The Italian Bolognese is a rare breed of nobility. Their name is taken from the northern city of Bologna, even though they possibly descended from the Bichons of Southern Italy. During the Renaissance, these playful little dogs were exchanged as presents among nobles. They were popular because of their fluffy, pure white coat, and vivacious, playful personality. They are very intelligent and quite the charmers. After receiving two Bolognese as presents, Philipe II, King of Spain from 1556 to 1598, wrote his thanks, saying, “These two little dogs are the most royal gifts one can make to an emperor.” Bolognese are totally devoted to the family. They love you and you love them! 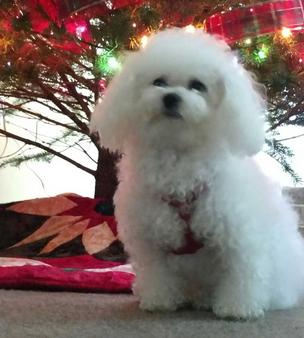 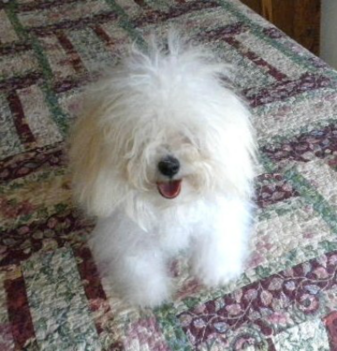 About Us-  We are long time breeders of Bolognese.  We take the health and preservation of the Bolognese breed seriously.  We have been health testing our adults for three/four generations.  Bolognese are a rare breed- with very few Bolognese dog breeders in the USA, and even fewer bloodlines.  So within our family,  three of us raise Bolognese.  We only raise Bolognese.   We share our males so our puppies are never inbred.  We do this together, so we can preserve the Bolognese bloodlines and help to insure that this wonderful little breed continues to thrive in the United States! 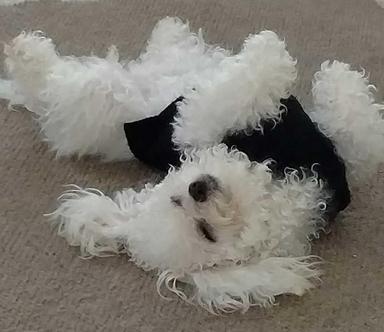 The Italian Bolognese: A History
(Summarized from Bolognese by Wolfgang Knorr)

"Three black buttons in the middle of a cloud of white" is an apt description of the rare and beautiful Italian Bolognese. These playful, rare breeds have a somewhat obscure history. They were already known in ancient Egypt and Phoenicia and were probably brought to Italy by travelers during the 13th century. In the ancient Italian city of Bologna, these small, white dogs became a favorite of the aristocracy. Traders sometimes received the equivalent of the dog's weight in gold as payment, so they were quite valuable. The Bolognese were favorites of well-born Italian women and became mandatory fashion accessories. They were pampered, perfumed, and adorned. The Gonzagas, a noble family that ruled parts of Italy between 1328 and 1708, bred Bolognese in their estates. Cosimo de Medici (1389-1464), an influential Florentine citizen and an important patron of the Italian Renaissance, gifted at least eight pups to various nobles throughout Europe. Many historical personalities were proud owners of the little Italian Bolognese beauty: Madame Pompadour (1721-1764), Catherine the Great of Russia (1729-1796), and Maria Therese, Empress of Austria (1717-1780). Their popularity continued during the time of Kings Louis XIV and XV, well into the 19th century. Master artists Gozzoli and Durer immortalized them in paintings. Ordinary citizens had no chance to own one of these small dogs, so after the downfall of Europe's aristocracy, the revered dog also fell from favor. By the end of WWII, they had almost become extinct. The first modern Bolognese were registered by the kennel of Sna. Maristella Ogno in the late 1950's.
The first Bolognese dog to arrive in America is credited with Bert and Dorothy Goodale. They were respected breeders for 45 years at the time. Dorothy became very intrigued by the fact that the Bolognese was the only variety of the Bichon breeds that had not been imported to the United States. After contacting three European breeders and with much coaxing, it still took two more years to convince them to part with some of their stock. She was finally able to import the first Bolognese into the U.S. in 1986.​
With less than a thousand Bolognese in the United States today, Bolognese dogs are still a rare and precious breed, bred for centuries for only one purpose--to be a devoted, loving companion to people.​
​