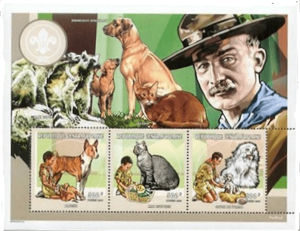 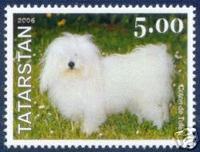 Issued by Tatarstan an autonomous Soviet Republic, e established in 1920 and declaring it's independence from the Soviet Union in 1999.

Bolognese stamp issued by Touva in 2005. (often spelled Tuva) is located in the southern area of Siberia 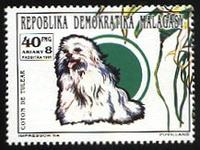 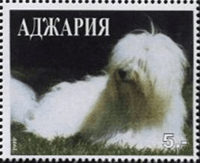 Issued by the Republic of Saharwi in 1998.  This stamp was included in a set of stamps featuring other dogs from Africa.

Notice the red dot on the map indicating Madagascar the origin of the Coton De Tulear.

Issued in 1999 by Adjaria an autonomous republic within the Republic of Georgia,  formerly of  the Soviet Union.

This is one of several Coton De Tulear stamps issued in Russian states within the past few years. 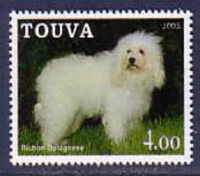 Issued by CAR a Republic of Africa in 1999 this souvenir sheet commemorates the Boy Scouts of Central Africa. Stamp depicts a Boy Scout helping an injured Coton. 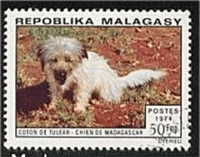 Issued by the Republic of Mauritania, a country in north west Africa. A souvenir sheet depicting African animals including the Coton de Tulear.

Issued in 1991 by Madagascar this stamp was part of souvenir sheet depicting other African animals. 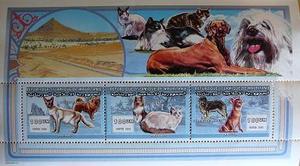 The first Coton De Tulear stamp issued in 1974 by Madagascar.

Madagascar is where this rare, ancient, Coton De Tulear dog originated more than three centuries ago.

This souvenir sheet was issued in 1991 by Madagascar.  Again depicting several other African animals.